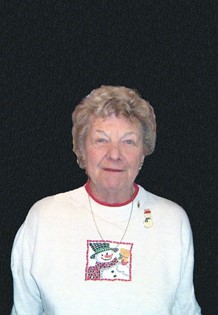 Violet Christine Sterkel was born on May 11, 1929 in Riverton, WY to George John and Amelia (Herder) Sterkel. She was one of 18 children. She attended first through eighth grade. In 1971, at the age of 42 she received her G.E.D. from the first graduating class of Central Wyoming College’s G.E.D. program. She lived her 85 years in Riverton with temporary stays in Torrington, WY, Wheatland, WY, and Grants, NM.

She was baptized into the Lutheran Faith.

She was very active in the BPO DOES. She held many offices with the organization but her proudest was serving as the President of the Riverton Chapter and being able to serve her community and organization.

She worked farming, as a waitress, a department store supervisor, a jewelry store clerk, and as a legal secretary serving over 70 plus years in the workforce. She was employed with Girard Law Office at the time of her death.

She married Thaine Cooper Fleak on July 28, 1946 in the backyard of his parents, Bill and Orpha Fleak at 358 N 5th E in Riverton. Together they raised six children and two foster children. When Thaine was killed at age 50, in a truck accident, Vi raised their two youngest children by herself.

Her family said that she loved being with family, especially her grand children and great grandchildren. They all lovingly called her “Grandma Vi” and so did everyone of their friends and teammates. She was at all of their activities, never missing an opportunity to cheer them on and be there when they needed their spirits lifted. They were her greatest joy and kept her going.

She also enjoyed fishing, cooking, crocheting, and camping. She referred to herself as a “Jackie” of all trades and a master of all!

She was preceded in death by her parents, George John and Amelia Sterkel, her husband, Thaine C. Fleak; her mother in law and father in law, Bill and Orpha Fleak, her daughter, Elaine Fleak; her infant grandson, Aaron Fleak,; her sisters, Leona Schilreff, Mary Ann Jorgenson, and Helen Sterkel; numerous half brothers, half sisters, nieces and nephews.