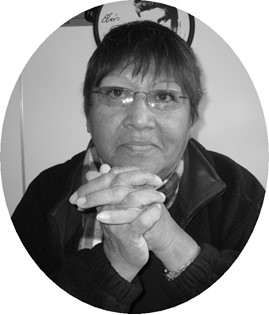 Guestbook 1
Funeral services for Patricia Diane “Patti” Haverkamp, 63, who died June 10, 2014 at her home in Riverton will be held 10:00 a.m., Monday, June 16, 2014 at St. Stephens Catholic Church with Father Phil Wagner officiating. Interment will follow at the Arapaho Catholic Cemetery. A visitiation will be held from 4:00 until 6:30 p.m., Sunday, June 15th at Davis Funeral Home. A Rosary will be recited at 7:00 p.m., Sunday, at 72 Little Wind River Bottom Road with a Wake to follow. A feast will be held at 72 Little Wind River Bottom after the internment.

She was born December 30, 1950, in Fort Washakie, Wyoming, daughter of Lloyd James and Edith (Smith) Dewey. She was raised at the Arapaho Ranch in Thermopolis and graduated from Hot Springs High School. She attended and studied nursing at Casper College and later the University of Wyoming, serving as an active member of the Keepers of the Fire at UW.

Patti cowboyed for her dad at the Arapaho Ranch and the State Line Ranch in Colorado. She worked as a CNA at the HSC Hospital with her Mom and Canyon Hills Manor in Thermopolis, tended bar at the Silver Dollar and the Owl Bar in Thermopolis. She was a teacher’s aide at St. Stephens School after moving from Thermopolis. She also worked as a ranch hand along-side her husband and children in Hot Springs County. Patti worked as a CNA at the Happy Siesta Nursing Home in Remsen, Iowa and the Alzheimer’s Unit in Minnesota. She then worked as an Apartment Manager and most recently as a Casino Slot Hostess at the Wind River Casino.

She was preceded in death by her parents, Lloyd and Edith, grandparents, Scott and Inez Little Dewey, Clarence and Catherine Wolf-Elkins Smith, brothers Lauren and Alexander and sister, Maxine.

Memorials may be made to Wind River Dialysis in care of Davis Funeral Home, 2203 West Main Street, Riverton, WY 82501.