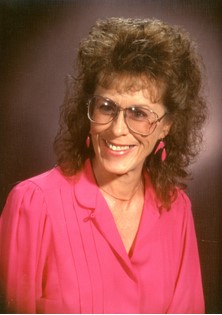 A memorial service will be held for friends and family at her home 4 miles north of Riverton at 18 Rogers Lane on Sunday, August 17th, 2014 at 1:00 P.M. A potluck BBQ dinner and celebration will follow. Graveside services will be held the following day on Monday, August 18th at Mt. View Cemetery, 3540 West Main Street, Riverton, Wyoming.

Judy was born on September 24th, 1944, in San Mateo, California, while her father, Gordon “Bing” Wallace Bates, was serving in the U.S. Navy during WWII. Soon after her birth, her mother, Ruby Jean (Clevenger) Bates, took Judy and her brother Billy, by train back to Edgerton, WY, to wait for the War’s end. Judy lived in Edgerton and attended elementary school in Midwest for her first 12 years. Her family then moved to Newcastle, WY, where she attended Jr. High and High School. She was a member of the Job’s Daughters, worked briefly for a local funeral director and as a nursing assistant in Newcastle. She spent her senior year in Laramie, WY, graduating in 1962. She was married to Gene A. Wocicki of Riverton, WY, on March 9, 1963 in Newcastle and had 3 children with him: Tami Danette Wocicki (1964-2013), Steven Gene Wocicki, and Scot Lee Wocicki.

Judy and Gene lived in Newcastle, Casper, and Gillette during the first 13 years of marriage. From 1972 to 1978 she was the President of the Wyoming Association of Retarded Citizens and from 1973 to 1975 she worked at B&K Saddlery in Gillette. The family then moved to a ranch on Gooseberry Creek between Worland and Meteetsee, WY, then to Worland and finally Basin, WY, where they were divorced in 1981.

Judy held a variety of jobs in the Basin and Greybull area including stockyard auction worker, veterinary assistant, convenience store manager and bartender. In 1989, she moved with her new husband Kenneth “Butch” Moore to Missoula, MT, Rapid City, SD, and then to Battle Mountain, NV, where she opened her first Jud’s Trading Post. She returned to Wyoming in 1997 and settled in Riverton to be near her daughter, Tami.

In Riverton she started another incarnation of Jud’s Trading Post and a whole new venture: JB Taxi. These two local businesses have saved tons of reusable things from the local landfill and countless people an expensive Saturday night in jail.

In addition to running two businesses, she maintained a beautiful yard and garden and humble home on 2 ½ acres, with two horses, many chickens, dogs and cats. Her affinity for antiques and collectables can be attested to by anyone who ever set foot in her store or home. This love for beautiful things and her compassion for children and animals is only dwarfed by her deep love of friends and family because she was always there to help out—be it an acquaintance or a stranger down on his luck or a young family in need of a cheap washing machine.

In her little spare time she loved to garden, craft, sew, cook, play cards with her women friends on Friday night, and watch the Broncos and professional bull riding on television. She praised God in her quiet way and was baptized Methodist, a confirmed Episcopalian but active in several local congregations when the Holy Spirit moved her. She loved for her friends and family to gather around her table on holidays, and also loved the Earth’s natural places where she found renewed strength and peace in the miracle and mystery of life.

She is survived by too many dear friends to mention; her friend and former husband, Gene Wocicki; two sons, Steve Wocicki of Shoshoni, and Scot and his wife Frances Wocicki of Berkeley, CA; her brother Billy Bates of Laughlin, NV, and his former wife Sharon and their three children, Shea, Shana and Shad Bates; grandchildren Amanda Mackay of Washington State and Shane Wocicki of Cowley, WY; cousins Bob Clevenger of Green River and Jack Clevenger of Gillette. We will all deeply miss her limitless guidance, wisdom, energy, and laughter.

She was preceded in death by her parents Bing and Ruby Jean Bates, and her daughter, Tami Wocicki.

Memorial donations may be made to PAWS in care of Davis Funeral Home, 2203 West Main, Riverton, WY 82501.

Online condolences for the family may be made at www.TheDavisFuneralHome.com.