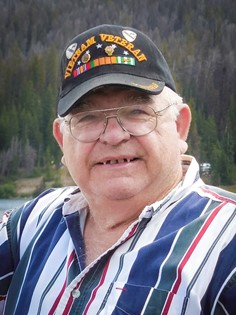 Guestbook 9
LeRoy Arthur Wempen, 71, of Stratford, Oklahoma, completed his journey in this life on June 14th 2014, at Lander Regional Hospital in Lander, Wyoming. Services will be held at 10:00 a.m. on Friday, June 20th, at Davis Funeral Home in Riverton, with Reverend Ron Clapp officiating. Graveside services with military rites to follow at Mountain View Cemetery, Riverton.

LeRoy was born June 11th, 1943, in Riverton, Wyoming, to Arthur and Laveta (Moore) Wempen, and had two brothers, Donald and Phillip. LeRoy attended Pavillion and Morton schools where he met and fell in love with the love of his life, Donna Winchester. They were married January 26th, 1962, at Kinnear, Wyoming, and were blessed with two children, Bryan Lee and Diana Sue.

LeRoy worked in the uranium industry until he served his country by fighting in the Vietnam War with the United States Army's 1st Cavalry Division where he was a machine gunner. He then returned to Wyoming to work in the uranium industry until the couple moved to Sumner, Nebraska, where he raised cattle and farmed for 26 years. The couple then moved to Stratford, Oklahoma, to enjoy a warmer climate and eventually retire.LeRoy and Donna enjoyed a summer home in Dubois, Wyoming. LeRoy loved spoiling his grandkids and creating projects that kept him busy in retirement.

LeRoy was preceded in death by his parents and two brothers. He will be missed by his wife Donna of 52 years; his son, Bryan, of Tulsa, Oklahoma; daughter, Diana Connell and her husband Wayne, and their four children Joshua, Josiah, Meggan, and Emmalee, of Hershey; and numerous nieces, nephews, cousins and friends.

Memorials may be made to American Heart Association in care of the Davis Funeral Home, 2203 W. Main Street, Riverton, WY 82501.