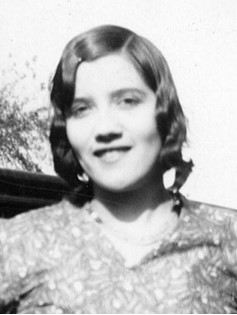 At her request, there will be no services. Cremation has taken place per her wishes.

Lillie Mae Franks was born Nov. 18, 1911, in Essex, Iowa to Sidney and Laura Franks. Her mother died when she was born and her father wasn’t able to care for an infant along with her three brothers and a sister. She was adopted later by Leroy and Mary Josephine Franks. Her adopted parents also adopted another boy at that time.

She lived with them on a farm near Turin, Iowa until she graduated from eighth grade. She was unable to continue her education as it would have meant boarding in town, which wasn’t affordable.

She went to work as a housekeeper for a neighbor whose wife had became disabled. She worked for them until she met the love of her life, Holger Poulsen, who had emigrated from Denmark and was working on a farm owned by his uncle and family.

In 1937, they lived for a short time in Nebraska and California before moving to DuNoir, Wyo. on Union Pass where Mr. Poulsen was employed by Wyoming Tie and Timber Company.

Mrs. Poulsen loved the mountains and never had any desire to return to Iowa. Her parents and family visited a few times, and she also made several trips to Iowa until her parents died in 1945.

In 1942, the Poulsen family moved to Dubois. She leased and operated the Rustic Art Café from Shorty and Mae Meckem while her husband continued working in the timber. In 1946, they went into the sawmill business for themselves and operated their sawmill until about 1964.

Mrs. Poulsen worked alongside her husband, learning to drive trucks loaded with logs in the days when it was not considered the normal occupation for ladies.

She worked for a time at Welty’s General Store, cleaned the Dubois Telephone Exchange for Bill and De Lamb, and assisted Joe and Mary Back in their studio east of Dubois. She then began a long career as housekeeper and cook at the Circle Ranch. She retired from the ranch in 1996. The Circle Ranch and the Fish and Downey families were a second family to her.

Being with her family and taking care of them and her home were the most important things to her. In the summer she could be found working in her huge yard at the family home just east of Dubois. She was also an excellent cook and seamstress.

Her family said she was a quiet and private person, never joining clubs or organization, but she always welcomed family, friends and all visitors into her home.