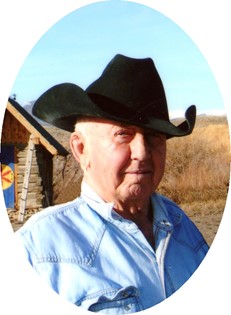 Guestbook 8
Burke Johnson, 85, of Crowheart died on Sunday, June 15, 2014. A memorial service will be held on Friday, June 20, 2014, at 2:00 pm at Davis Funeral Home. Pastor Dale Adams will officiate. Inurnment will follow at Mountain View Cemetery..

Nicholas Burke Johnson was born on June 17, 1928 in Lander, WY to William Nicholas and Katherine (Baker) Johnson. Burke began elementary school in the small community of Burris, Wyoming, later moving to an elementary school that was built at the current location of the ditch camp on Old Yellowstone Highway in Crowheart. His ninth grade year was spent in Cheyenne with his grandparents Billie and Emma Johnson. His grandfather, Billie, was an early sheriff of Fremont County and was serving as State Land Commissioner. Tenth and eleventh grades were spent at Lander High School, where he resided in a boarding house. He graduated from Dubois High School with a class of 3 students in 1946. He spent his entire life in the community of Crowheart, WY.

On September 21, 1950 at the First Episcopal Church in Lander, Wyoming, he married Dona E. Hays. They raised two sons, Mike and Doug. They celebrated 63 years together running and growing the Johnson Cattle Company.

Burke was a life member and huge supporter of the NRA. He served on the Board of Directors of the American Shorthorn Association and was a member of the Red Angus Association. He was also instrumental in the establishment of the Dubois Bank and the Medicine Bow Bank. . He also served on the Dubois School Board during the time that his sons Mike and Doug attended the same school.

Ranching was Burke’s life from the time he was able to walk. At nine years of age, Burke was sent alone to watch over the summer grazing at Kola Teepee west of Dubois. At that time no cow camps existed for the ranch, so he spent his time on the mountain staying in cabins with cowboys from other outfits. Carrying on the family tradition for the ranch that had its beginnings in Crowheart, Wyoming in 1903. Burke truly loved all aspects of the ranching life. A third generation owner of the Johnson Cattle Company and avid outdoorsman, he chose to spend his time in the wide open spaces of Wyoming enjoying the beautiful country he called home. When he was not outdoors, he was an avid reader of true history and westerns. He looked forward to winter, when trapping was a favorite pastime. Burke always said, “The greatest gift you can give your kids is the gift of teaching them how to work.” He was one of the last, true cattlemen of the Wind River Country.

He was preceded in death by by parents Katherine and Nick Johnson, brother Billie Johnson, sister Anne Deal, and son Doug Johnson.