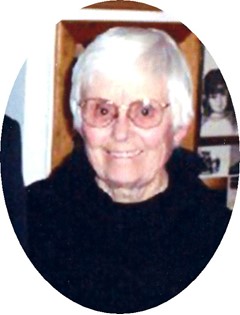 Edith Mae Anderson was born on January 21, 1926 in Riverton, WY to Petrus and Edith Amelia (Rosen) Anderson. She was one of three children. She was raised in Riverton and graduated with the Class of 1944 of Riverton High School. She lived her entire life in Riverton.

She met her husband in 1946 while working at the Acme Theater, he had come to visit his twin brother and fell in love and relocated to Riverton. They were married on August 24, 1948 at St. James Episcopal Church in Riverton. Together they raised four children, Randy, Larry, Reone, and Beverly. While being a homemaker she along with her mother, Edith Anderson founded Edith’s Floral in 1948. After 48 years, she retired in 1996.

She was active in the community supporting her husband, a volunteer fireman and her children in all of their activities.

Her family said that she enjoyed motorcycling all over the country with her husband. She was a wonderful wife, mother, gramma, and great gramma. She truly loved spending time with her kids, grandkids, and great grandkids. She enjoyed flowers in her yard, taking walks, helping out where ever and whomever she could. Edith was a great lady full of compassion and grace, loved by those who knew her.

She was preceded in death by her husband of 63 years, R.J. Brown; her son, Randy Brown; her sister, Ethel Anderson; her brother, Edwin Anderson; and her parents, Petrus and Edith Anderson.

Flowers are welcome or memorials may be made to the Riverton Fire Department or a charity of the donors choice.