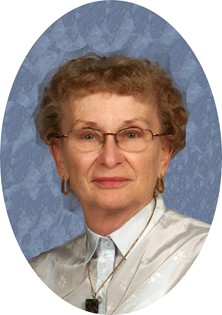 Marillyn Jean Cleary was born on July 25, 1927 in Saginaw, MI to Edward William and Sylvia Maori (Griffith) Cleary. She was raised in Saginaw and graduated high school there. At 19 her family moved to Rose City, MI where her father established an insurance/real estate business. She worked in her father’s office until she met and married William S. Eichler of Saginaw, MI on September 17, 1949. After graduation from the University of Michigan, Bill joined the family business in Rose City and expanded it to include accounting services. She worked beside him in the business helping with training and office administration.

Besides being busy with her family she also was busy with the Methodist Church as a choir director for twenty years, Sunday School Superintendent, teacher, and chairperson of the Women’s Society.

Bill and Jean enjoyed traveling and it was always west from Michigan. In the mid 70’s they were able to realize a dream of living in the West and moved to Riverton, WY. After moving, she went to college and obtained her Bachelor of Arts degree from Laramie and did substitute teaching for School District 25 for many years. Again she was very active with her husband in the community, their church, and enjoyed their life to the fullest.

They traveled extensively, visiting many countries from Australia to Russia to China. They also enjoyed the orchestra in Jackson Hole and the plays and other cultural events at CWC. They were big supports of the arts.