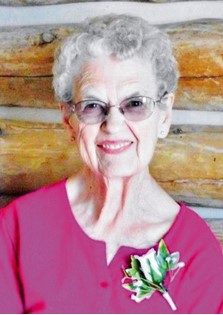 Guestbook 4
Services for Esther Lea (Olson) Luers, 85 will be held 10:00 a.m., Friday, July 11, 2013 at Trinity Lutheran Church in Riverton, with Pastor Boehlke officiating. Viewing will precede the service at 9:00 a.m. Interment will follow at Mountain View Cemetery under the direction of Davis Funeral Home.

Mrs. Luers died July 4, 2014 at Wind River Healthcare. She was born January 12, 1929 in Casper, the third of six children to Oscar and Anna (Savick) Olson. The family moved to Riverton, Wyoming in 1944 and on August 28, 1946 she was married to Frank Luers at Trinity Lutheran Church in Riverton. They lived in Laramie for four years while her husband obtained his engineering degree. They then lived in several Rocky Mountain States while he was employed by the U.S. Geological Survey. In 1953 they settled in Casper, where she lived until 2013, when she moved to Riverton to be closer to her daughter and her family and to her sisters.

She organized the Professional Engineers Auxiliary and assisted her husband in his duties as an officer of the Wyoming Engineering Society and the Oil Capital Kiwanis Club. Following their divorce, she was popular as a child-care provider for several Casper families. She also worked at Miracle Ear for four years. She was an active member of Trinity Lutheran Church (Casper), Lutheran Women’s Missionary League, Church choir, Trinity Solos, taught Sunday school for 19 years, and prepared communion for 20 years as the sole member of the Altar League. From 1983 through 2005 she was a volunteer for the Jerry Lewis Labor Day Telethon, where she was in charge of the mail department. She enjoyed cross word puzzles, sewing, and doing counted cross-stitch. People commented that the back of her counted cross-stitch work was every bit as nice as the front.

In addition to her parents, she was preceded in death by her daughter Brenda Hundertfund; brother Don E. Olson, and sister Doris Anderson. Even though they were divorced, she & her ex-husband remained friends until his death in 2002.

Survivors include a daughter Donna Boyd of Riverton; sons Frank A. (Beth) Luers and Gary (Gerri) Luers, all of Casper; ten grandchildren and 21 great-grandchildren. She is also survived by her three sisters; Eleanor Cantrell and Carol Maulik and her husband Lew of Riverton and Connie Ellis of Hudson.

The family would appreciate memorials to the Cystic Fibrosis Foundation in care of the Davis Funeral Home, 2203 W. Main Street, Riverton, WY 82501.