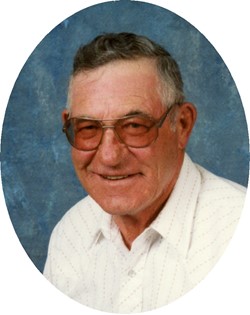 Guestbook 1
Charles “Chuck” Fenton, 93, of Hidden Valley, died Friday, July 4, 2014, at Kindred Nursing and Rehabilitation – Wind River Center. A memorial service will be held on Saturday, July 12, 2014, at 10:00 am at the Cornerstone Community Church in Riverton. Pastor Scott McFarland officiating. Inurnment will be at the Freeland Cemetery near Casper at 11:00 am on Sunday, July 13, 2014.

Charles Alveroy Fenton was born on October 1, 1920 in Lost Springs, WY to George Aaron and Sarah Rebecca (Stout) Fenton. He was raised on the family ranch along with his five siblings. He attended schools in the area and graduated high school.

He married his wife, Mary Jane “Janie” Brewer on March 12, 1949 in Casper, WY. They had two sons, William Cleveland and Charles “Charlie” A. Jr. They spent 62 years together before Janie passed on March 25, 2011. Together they ranched in the Powder River, Waltman, and Highland areas before the settled in Hidden Valley area near Shoshoni.

Before he was married he rode the pipeline for Northern Utilities from 1940 to 1949. His life was spent in Wyoming ranching except for a short period, 1954 to 1959, that he spent in California.

He served many years on the ASCS Board.

His family said that he loved riding, training and breaking horses. Horses were his passion.

He was preceded in death by his parents, George and Sarah Fenton; his wife, Mary Jane “Janie” Fenton; his son, William Cleveland Fenton, in 1976; his brothers, Art and Herb Fenton; and his sisters, Josephine, Vivian and Georgia.

Memorials may be made to the COPD Foundation, in care of Davis Funeral Home, 2203 West Main Street, Riverton, WY 82501.