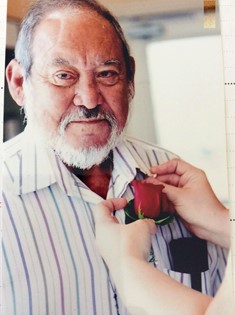 Mr. Chavez passed away Saturday, January 11, 2014 at his home in Los Angeles, California. “Pete” was born January 4, 1940 to Trinidad and Aurelia Chavez in Riverton, Wyoming, the sixth of eight children. He graduated from Riverton High School in 1959 and earned an Industrial Electronics Engineering-Technician degree from the Colorado Technical Institute in 1960.

Pete served in the Air Force in the Vietnam War as a USAF Airman. After the war he met his beautiful bride, Juanita Jesus Rivera, and they married in 1981 in Los Angeles, CA. He retired his position as a Supervisor for the United States Postal Service in 1995.

Pete was well known and liked throughout his neighborhood. He was a very kindhearted, giving man and loved to spend time with his family and friends. He was actively involved in traveling, reading and volunteered much of his time at the local Veterans Affairs center. Though his health suffered, he was always strong willed and positive; a survivor.

Pete was preceded in death by his parents and his sisters Jesse and Mary Colores and brother, Paul Colores.