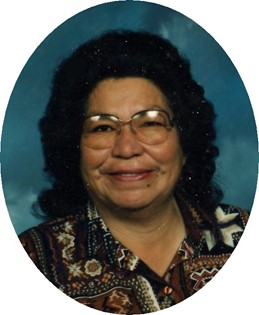 Guestbook 1
Elizabeth “Betty” Hinzer, 71, of Arapaho died at the Wyoming Medical Center in Casper on Saturday, August 9, 2014. A rosary will be held on Wednesday, August 13, 2014, at St. Stephens Catholic Church at 7:00 pm with a wake to follow at 450 Little Wind River Bottom Road. The funeral services will be on Thursday, August 14, 2014 at 10:00 am at St. Stephens Catholic Church with burial to follow at the Arapaho Catholic Cemetery.

Elizabeth Ann Bell was born on December 13, 1942 in Arapahoe, WY to Christopher and Isabell (Brown) Bell. She grew up on the Wind River Reservation attending schools at St. Stephens Indian School where she graduated high school.

She married Melvin Wagon and John Hinzer both of which preceded her in death.

She had lived in California and Washington with her late husband John Hinzer before moving back to Wyoming.

Her family said that when she was young she participated as a Traditional Dancer in the PowWows. She enjoyed crocheting, beading, watching Lifetime and going to the Casino. She loved spending time with her family especially her grand children and great grand children.

She was preceded in death by her parents, Christopher and Isabell Bell; her husbands, Melvin Wagon and John Hinzer; her sons, Gary Wagon and Chris Wagon; her brothers, Lamont, Curtis, Donald, Lonnie, and Bobby; and her parent Ben Sr.