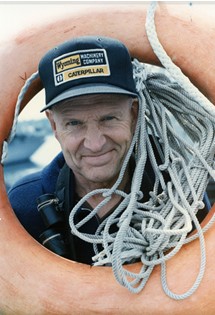 Guestbook 12
Loren Anderson, 89, of Riverton, died at the Help for Health Hospice Home on Tuesday, August 12, 2014. A funeral service will be held on Saturday, August 16, 2014, at 10:00 am at Davis Funeral Home. Pastor Rex Whitman and Pastor Dale Adams will co-officiate. Burial will follow at Mountain View Cemetery with military honors.

Loren Lloyd Anderson was born on January 19, 1925 in Riverton, WY to Christian Larsen and Effie Flora (Hodgson) Anderson. He was one of four boys. He attended schools in Riverton and graduated from Riverton High School in 1943.

On June 18, 1954, he married Janice Gidley in Riverton, WY. They celebrated 60 years of marriage this last June. They lived in the Riverton area their entire marriage.

He was of the Baptist faith and was member of First Baptist Church in Riverton since 1936. He served as a trustee for the church. He helped clean off the bricks used to build the “old” Baptist church on 6th and Fremont.

He worked for the U.S. Postal Service and retired after 28 years of service in June of 1980.

His family said that he enjoyed farming, fishing, hiking, and spending time at his home on North 8th West, and his cabin in Dubois. He loved working crossword puzzles. He was also a photographer and enjoyed taking pictures of about anything.

He is survived by his wife, Janice of the family home; his brother, Lowell Ray Anderson and his wife, Sara of Cody, WY; and numerous nieces and nephews.

He was preceded in death by his grandparents Arthur and Flora Hodgson; his parents, Christian and Effie Anderson; his brothers, Kenneth Anderson and Floyd Anderson; and his niece, Christine Anderson.

Memorials may be made to the First Baptist Church or Help for Health Hospice Home in care of the Davis Funeral Home, 2203 W. Main Street, Riverton, WY 82501.