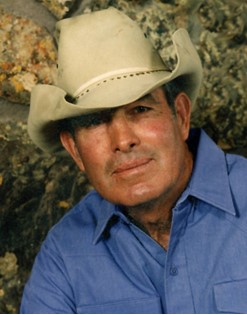 Guestbook 3
Dalton “Dick” Hamilton, 84, of Hudson, went to be with his Lord and Savior in the early morning of Friday, August 22, 2014. There will be a graveside service with Military Honors at the Hudson Town Cemetery on Wednesday, August 27, 2014, at 8:00 a.m. Pastor Paul Morrison will officiate. A breakfast will follow the service at the Svilar Park in Hudson.

Dalton Lewis Hamilton was born on January 31, 1930 in Rock Springs, WY to Robert Lewis and Jane Abbigale (Megeath) Hamilton. He was one of four children. The family ranched near Fort Washakie. He attended a one room school at the Old Wind River School in Fort Washakie. He graduated high school from Fremont County Vocational High School and attended the University of Wyoming, studying engineering. He was a lifelong resident of Fremont County.

He was a member of the Hudson Community Church where he was a board member.

He served his country with the Army in the Korean War. He was honorably discharged.

On February 21, 1953, in Burien, WA, he married his wife of 61 years, Carolyn Stober. Together they raised three children, Chris, Dale, and Susan, on the family ranch.

His ranch was first and foremost his main “job”, which he loved, he also worked in the oilfield, for Gilpatrick Construction, and was a sales representative for Moorman’s Feed.

His family said he loved to fish, family outings, pack trips, and anything outdoors. He loved to be around family and have family gatherings. He also raised and showed dogs with his wife, Carolyn.

He was preceded in death by his parents, Robert Lewis and Abbigale (Megeath) Hamilton

Memorials may be made to the Help for Health Bus in care of the Davis Funeral Home, 2203 W. Main Street, Riverton, WY 82501.