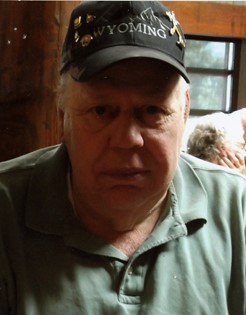 Guestbook 0
A memorial service for Richard Meisinger, 84, who died August 14, 2014 at the Nebraska Masonic Home in Plattsmouth, NE. A memorial service will be held on Thursday, August 28, 2014, at the Shoshoni Senior Center at 10:00 a.m. Burial will be at Mount Hope Cemetery in Lander.

Richard Neil Meisinger was born February 5, 1930 to Carl H. and Clara K. Ahrens Meisinger in Cass County, Nebraska. Richard was a member of the Grace Lutheran Church. Baptized and confirmed in Louisville Christian Church in Nebraska.

Richard worked as a crane operator for 35 years. Ellene and Richard moved to Wyoming from Nebraska in 1975. Ellene passed away in Lander Dec 8, 2002 at the age 72. Richard was in Nebraska National Guard from 1950 until 1957 out of Nebraska City.

Memorial contributions to the Masonic Home, 1300 Avenue, Plattsmouth, NE 68048 or the donor’s choice.