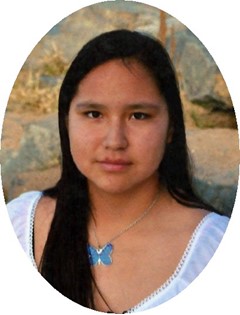 Lashelle Faye Susan Kateri Shakespeare was born on December 28, 1994 in Riverton, WY to Lonny Pierre Shakespeare and Crystal Raelene Blackburn. She lived in Fremont County all of her life except for three years in Laramie, WY.

She attended schools in Fremont County and was a straight “A” student.

She was baptized into the Catholic faith and also was a member of the Native American Church.

She was a caregiver to her family and friends.

Her family said that she loved basketball and played whenever she could. She also liked to write poems, taking photos with her phone, attending traditional ceremonies, music, drawing, camping, fishing, and going on walks. She loved to braid her hair and others hair and to baby set. She really loved her brothers, sisters, family, and friends and being with them.