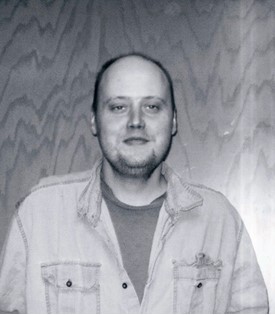 Guestbook 1
Byron James Landis (34) went to be with his savior October 27, 2014 at 8:10 a.m. at Wyoming Medical Center, Casper WY. Byron passed away following a sudden illness.

Byron was surrounded by his family during his fight for life. Byron was born September 18, 1980 in Riverton Wyoming, to Marla Jordan of Riverton and James Landis, Arapahoe WY. He attended schools at Arapahoe, Riverton, Basin Wyoming and West Yellowstone, Montana.

Byron is survived by his mother Marla Jordan (Dave) of Riverton, father Jim Landis of Arapahoe, brother Cory Landis (Paula) of Riverton, sister Danielle Landis St.John (Chad) of rural Riverton, brother Alan Landis (Nina) of Basin, and sister Amber Landis Hamilton (Dean) of Whitefish, MT. He is also survived by nieces and nephews: Britney Landis, Paige St.John, Brett St.John, Collin St.John, Tyler Landis, Trenton Landis, Alan Landis Jr., Brianna Landis and Gage McDonald Hamilton of Whitefish, all of which he was very proud of and loved with all his heart. He is also survived by numerous aunts, uncles and cousins.

He was proceeded in death by grandparents Virgil and Bertha Jordan and Harold and Marge Landis and an aunt Faye Jordan Tolman and cousin Gary Tolman.

Services will be held Saturday November 1, 2014 at the Church of Jesus Christ of Latter Day Saints on North 4th West and Elizabeth Drive in Riverton. Viewing will be at 9:00 a.m. at the church with funeral services at 10:00 a.m. conducted by Bishop Mark McLaughlin. Burial will be at the Otto cemetery in Otto, WY., at 2:00 p.m. Davis Funeral Home of Riverton is in charge of arrangements. He will be missed by ALL!

Memorials may be made to the Landis Family in care of the Davis Funeral Home, 2203 W. Main Street, Riverton, WY 82501.