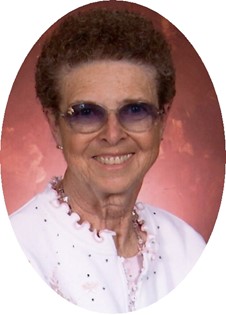 Nancy Patricia Williams was born on February 7, 1935 to James Ernest and Mildred Lucile (Alley) Williams in Carrollton, MO. She was one of three children and the only daughter. When she was in her late teens, she moved with her family to Missouri Valley where her father worked the Rudy Neils place.

On July 6, 1952, she married Ralph “Lewis” Medow in Riverton, WY. After their marriage, they worked the Medow family farm on Missouri Valley. Together they raised three children, two boys and one girl, Gordon, Robert, and Vicki.

She drove bus for Shoshoni School District while working the farm and being a full time homemaker. She was always there for her family.

Her family said that she loved gardening, growing beautiful flowers, sewing, knitting, going to the mountains in the summer and traveling cross country with her husband in their motor home. She also loved music and had a beautiful voice.

She is survived by her husband of 62 years, Lewis Medow; her son Gordon Paul Medow and his wife, Bonny; her daughter, Vicki Ann Medow; 8 grandchildren and 9 great grandchildren.

She was preceded in death by her parents, James and Mildred Williams; her son, Robert Lewis Medow; her brothers, James Ernest Williams, Jr., and Sam Williams; and step grandson, Michael Anderson.

Memorials may be made to the Trinity Lutheran Church and School or Good Shepard Auxiliary in care of the Davis Funeral Home, 2203 W. Main Street, Riverton, WY 82501.