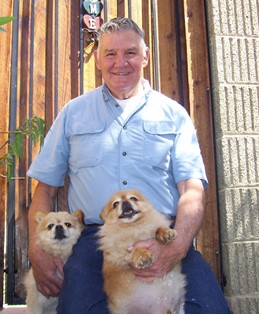 Glenn Moore was born on November 15, 1934 in Florence, CO to Ran and Ruby (Britton) Moore. He was one of four children. He was raised and graduated high school in Florence, CO.

He was baptized in the Church of Jesus Christ of Latter-Day Saints on April 1, 1961. He was a very active member in the church. He was the first Councilor to the Branch President, worked and enjoyed volunteering his time with missionaries, and devoted a lot of time to the church and activities. At the time of his death he was serving as Branch Mission Leader.

His family said that he was a very caring and giving man who was always helping those less fortunate.

His family said that he loved his dogs, Blackie and Deek, fishing, bird hunting, auctions, playing softball, dance, trap shooting all over the country, reloading guns, shooting pool at the Shoshoni Senior Center, and telling jokes. He was an avid sports fan and his team was the Yankees.

He owned a Standard Oil Gas Station in Eagle, CO in 1972 working the business for several years before becoming supervisor for The Electron Foundry, Denver division until he moved to Shoshoni in the summer of 1983. At the time of his death he was working for R & C Trucking as a gauger.

He was preceded in death by his parents, Ran and Ruby Moore; his daughter, Anna Moore; his son, Gary Richard Moore; and his brother, Lucky Moore.

Memorials may be made to the LDS Church of Shoshoni in care of the Davis Funeral Home, 2203 W. Main Street, Riverton, WY 82501.