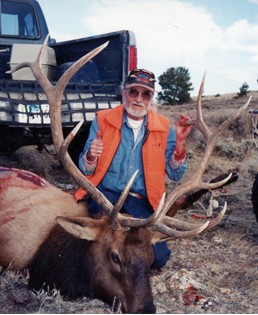 John Brennon Miller was born on June 16, 1933 in Philadelphia, PA to John Howard and Mary Ann (Galinski) Miller. He was raised in Philadelphia and graduated from Roxbourgh High School.

He was a member of the Union of Operating Engineers Local 400.

On February 16, 1957 he married Dolores Anne Malischewski in Philadelphia, PA. They had six children.

He moved from Philadelphia to Lander in 1969 and remained there until his passing.

He enjoyed hunting with his family. He hunted elk, deer, antelope, and moose, bagging several trophies over the years. He helped his sons and daughters get their moose and never got his because he was always looking for the “big one”. He organized and participated in the Miller One Shot Antelope. He made sure that his wife and daughters always got theirs first on opening morning while he and the boys stretched theirs out the rest of the season. His favorite hunting grounds were Limestone Mountain, Green Mountain, and Miller’s Lookout.

He loved fishing in Wyoming and Montana. Walleyes were his number one fish to catch. He fished Boysen, Bass, and Ocean Lakes in Wyoming and Fort Peck in Montana on the Walleye circuit, with his partner Mike Hoover. He also loved to ice fish in the winter with his family.

He loved old time country music and would listen to it while driving. He made a game out of questioning his family on the artist and title of a song playing and would add a small wager to make it more interesting, he usually won.

In his spare time he enjoyed making jewelry from silver, opals, and turquoise. He was always working on something for someone. His family said he was very talented.

His family said that he enjoyed going to the casino and kept a little black book of his winning and losses and he was ahead of the casino and was proud of that.

He loved his family. His children said he always said “He loved his children and would not sell them for a million bucks, but at times could give anyone of them away”.

He is survived by his wife of 57 years, Dolores Miller; his sons, John (Lin) Miller, Bill (Gina) Miller, and Mark Miller; his daughters, Dolores (Tim) Lookingbill, Brenda (Shawn) Wortman, and Michele (John) Harmelink; his 19 grandchildren and 15 great grandchildren, and his loyal pitbull, “Moose”.

He was preceded in death by his parents, John and Mary Miller, and a nephew, John K. Miller.

Cremation under the direction of the Davis Funeral Home.