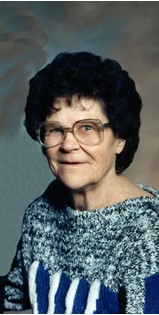 Guestbook 6
Alvina F. Smith, 92, of Riverton died Sunday, December 28, 2014 at the Kindred Healthcare in Riverton. Funeral services will be 10:00 a.m., Wednesday, December 31, 2014 at the Trinity Lutheran Church with burial to follow at Mountain View Cemetery. A viewing will be from 9:30 am to 10:00 am before the service . Alvina Fern Seger was born June 21, 1922 in Stuart, Nebraska to John Seger and Eva Alvina (Campbell) Seger. She married Gordon Albert Smith on June 4, 1940 in Stuart, Nebraska. She has lived in Riverton for the past 56 years. Mrs. Smith was a member of the Trinity Lutheran Church and a member of the VFW Auxiliary. Her family said she enjoyed writing poetry, square dancing, and crocheting. She is survived by her sons, Richard “Dick” Smith and wife Pat of Riverton, Darrell Smith of Tucson, AZ, Jim Smith and wife Sharon of Veyo, Utah, Robert Smith of Riverton; daughters, Sheila Troyer and husband Howard of Tucson, AZ, Cheryl Arey and husband Marty of Riverton; 16 grandchildren; 34 great grandchildren; and 11 great-great grandchildren; and sister, Shirley of Nebraska She was preceded in death by her husband Gordon A. Smith in 1997; and numerous brothers and sisters. Memorials may be made to Trinity Lutheran Church in care of the Davis Funeral Home, 2203 W. Main Street, Riverton, WY 82501. On-line condolences for the family may be made at theDavisFuneralHome.com. Services are under the direction of the Davis Funeral Home.