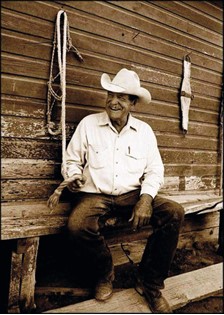 Guestbook 89
Darrell Winfield, 85 of Riverton died on Monday, January 12, 2015, at his residence. As were his wishes, cremation has taken place and no service will be held. A Celebration of Life will be Saturday, June 13, 2015, 6:00 pm at the Winfield Horses Barn.

Darrell Hugh Winfield was born on July 30, 1929 in Little Kansas, OK to Marion H. and Dapalean (Caywood) Winfield. He was the oldest of six children and was raised in Hanford, CA where he attended school. The family moved to California when he was 6 years old.

He made many trips to visit Wilburn Spring, also known as “Springer”, which was what he told his mother while he was actually courting the love of his life, Lennie L. Spring. They were married on July 3, 1948 in Hanford, CA. Together they raised six children, 3 grandchildren and 1 great grandchild. Many more children came through their doors and they “raised and mentored” all of them. They were always more than willing to help out a child.

In 1968, Darrell and his family moved to Pinedale, WY. He was working on the Quarter Circle 5 Ranch in Pinedale when he was discovered by Leo Burnett/Philip Morris Advertising and became the “Marlboro Man”. He remained loyal from 1968 to the time of his death. At one time, his face was known as the most photographed around the world. Darrell was asked what his life would have been like if he had not been the Marlboro Man, he said “life would have basically been the same”.

Darrell was a “true” cowboy. In 1974 he moved to Riverton and started WD/Winfield Horses.

He followed the American Indian Spirituality. He was given the Native American name of “Strong Mountain”. He attended sweats at several lodges, including his own, where everyone was welcome.

In his younger years he belonged to the Rodeo Cowboy Association (RCA), which later became the PRCA. He was also a member of the Screen Actors Guild.

His family said he loved horses, rodeo, especially team roping, ranching, and the cowboy way of life. He liked to tease, was quite a character, and never met a stranger. He collected bits and spurs, loved to read western non-fiction, history, and stories of the Native Americans. He loved to play Gin Rummy and Backgammon with his family and friends.

He deeply loved his wife of 66 years and made her and his family his highest priority. He also cherished his friends and all were welcome at their home. After having a stroke, his loving wife became his primary caregiver, along with help from family and friends. He was very grateful to Dailen for his assistance in overseeing his ranch.

Memorials may be made to the Donor’s choice of any organization dedicated to benefit children. Memorials may be sent in care of the Davis Funeral Home, 2203 W. Main Street, Riverton, WY 82501.