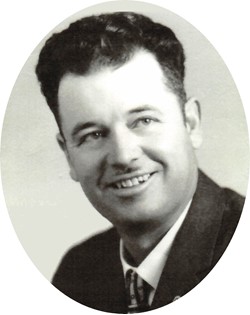 
Ray Lewis Lefforge passed away Saturday, March 14, 2015 at Kindred-Wind River Healthcare. In Ray’s own words…..He was born July 9, 1919 to Lewis Franklin Lefforge and Anna (Johnson) Lefforge on their farm east of Platteville, CO. Ray rode horseback about 5 miles to a country school he attended through the 8th grade. There were 13 students in one room. He helped farm sugar beets, corn & alfalfa as well as took care of milk cows, pigs, horses & chickens. At age 15, his parents moved close to Elk Mountain, WY so his Dad could work for his uncle at Elk Mt. Coal Co. Ray was left behind at the farm in CO so buyers could pick up the machinery they had purchased. Someone gave him a ride to Cheyenne, WY where he caught a freight train to Hanna, WY, riding in a coal car. He went to work at the mine his uncle owned.

He met Lorraine Hooker Irwin as soon as arriving at the mine, and was the only teenagers in the camp. Ray, age 16 & Lorraine, age 17 married on June 4, 1936 at the Methodist Church in Littleton, CO. They started life together at Seven Mile Lake near Hanna-Elk Mountain. There was no electricity and they hauled water from the lake. In winter, a few people from the camp made a trip to Hanna once-a-month for supplies that were sledded by horses to the camp from the main road. At the age of 17, Ray had to lie about his age and say he was 19 to work for the Nugget Coal Co. This caused problems years later with social security & driver’s license. In the summer, Ray worked on ranches.

Their first child, Mary Ann, died in infancy. Three weeks before their second child Loretta was born, their house at the camp burned to the ground & they lost everything. Twenty-two months later, Ray and a nurse delivered their third child Stanley. With only an 8th grade education, Ray worked in coal and gold mines in Colorado, and then he was a line tool setter for Remington Arms in Denver. In Laramie, WY he was a fireman for the Union Pacific Railroad. Ray provided a lot of his food for his family by hunting and fishing. Every year, about 30 friends and family members went elk hunting to replenish their freezers. In 1942, Ray and Lorraine began 30 years in the automobile business. They spent fourteen years in Hanna, WY and sold not only vehicles but also sold International truck & farm equipment, Maytag, Westinghouse, International appliances, RCA televisions, guns & hunting equipment. He was a terrific mechanic who serviced everything he sold, and also served on the Hanna School Board. In 1956, they moved to Rawlins, WY and built “Lefforge Motor Company”, a General Motors Dealership and Gulf Oil Co. Jobber. It was a family business with son, Stan and son-in-law Chuck Dean. Over the years, ranchers contacted Ray to hunt lion that was killing their cattle. He raised & trained quarter horses and was very proud of his training abilities. He was an avid team roper (at age 77, he won a buckle for top header of the Sweetwater Roping). For several years, Ray & Lorraine helped with the Rawlins Little Britches Rodeo, well known for being the second biggest in the USA. They had sixteen years in Rawlins. After retiring in 1973, they bought a ranch in Cedaredge, CO until 1975 when they bought 45 acres in Missouri Valley north of Riverton, WY. They moved to town in 1990 and built a home in 2000.

Ray continued hunting & roping (even painted his rope white so he could see it fly) until his health no longer allowed him to do so and he was forced to retire his dogs & horses.

He was a member of the United Methodist Church.

Memorials may be made in Ray’s name to the Riverton United Methodist Church or the Wounded Warrior Project.