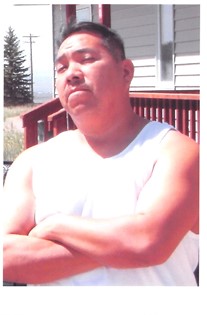 Powiah Albert Carpitcher was born on March 4, 1975 in Lawton, OK to Tina Agent. He grew up around Lawton, OK and Oklahoma City, OK and attended the Riverside Indian School in Anadarko, OK through his junior year. His senior year in high school he moved to Riverton and graduated from St. Stephens Indian High School. He and his wife, Jamie Redfield have been together for 25 years having met in September 1990 and then wed on December 12, 2001 in Lander, WY.

He worked for the St. Stephens Indian School for 17 years before his passing.

His family said that he enjoyed spending time with his children, watching movies, playing games, shooting pool, and visiting with his family and friends.

We have tried to remember and list everyone, please accept our apology if you were left out, it was not intentional.