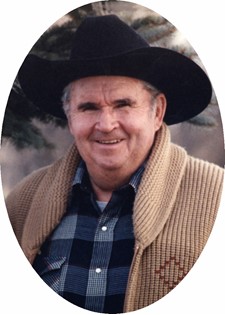 George Putnam, 87, of Riverton, died on Thursday, April 23, 2015, at the Help for Health Hospice Home. A funeral service will be held on Saturday, April 25, 2015 at Davis Funeral Home at 10:00 am. Pastors Dale Adams and Rex Whitman will officiate. Burial will follow at Mountain View Cemetery.

George Arnold Putnam was born on September 4, 1927 in Greely, CO to Floyd and Bessie Mae (Pauley) Putnam. He was one of five boys and was raised in the Greeley area.

He was of the Baptist faith and served as a Deacon in the church.

He served in the U.S. Navy during World War II. He was stationed in Guam for a year before returning to the United States where he received an honorable discharge in 1947.

He moved to Riverton a couple years after being discharged. He met his wife of 64 years, Dorothy Marie Evans, they were married on May 27, 1950 at the First Baptist Church in Riverton. They made Riverton their permanent home where they raised their four children.

George worked as a mechanic with road constructions, the oil fields, and at the Gas Hills.

His family said that he was hardworking and loved to be in the garden. In his young years he also was a member of a local bowling team.

He is survived by his wife, Dorothy of the family home; his sons, George A. Putnam, Jr. of Kemmerer, WY and John L. Putnam and his wife, Kimberly of Veteran, WY; his daughters, Susan Putnam Wright and her husband, Michael V., of Sturgis, SD and Nancy Putnam Stockhouse and her husband, Dr.. Jim Stockhouse of Jackson, WY; his brothers, Estress Putnam and Charlie Putnam; his six grandchildren and four great grandchildren.

He was preceded in death by his parents, Floyd and Bessie Putnam; his brothers, John Putnam and Elbert Putnam; and his granddaughter, Jenny Putnam.