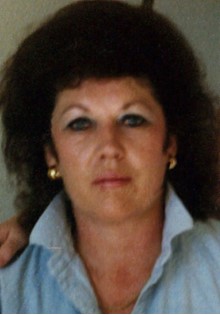 Guestbook 1
Betty Loretta (Moore) Woodard, our beloved mother, grandmother, sister, friend and family member, left this earthly life on April 30th, 2015, in Elko, Nevada where she had resided since 2004. Betty was born on April 12th, 1947, in Riverton, Wyoming to Wanda Jane (Kell) and Carl Moore.

Betty married Lonnie L. Woodard on September 19th, 1965, and together they had two beautiful daughters; Julie Ann (Woodard) Kraus of Elko, Nevada and Jodie Lee (Woodard) Gardner of Rochester, New York. The couple later divorced but remained close for their daughters. Betty moved to Elko, Nevada in 2004 to be close to her daughter Julie and her granddaughters.

She was preceded in death by her parents Carl Moore, Wanda Alexander and Arthur (Speck) Alexander and her beloved brother Norman Lee Moore, Private First Class U.S. Marine Corps, who was killed in action, on January 13th, 1967, in Vietnam. She will be laid to rest next to Norman.

You will always be in our hearts, our arms are wrapped around you; may you rest in peace. Condolences may be made to the family in care of Julie A. Kraus at 1927 Laxalt Way, Elko, NV 89801.

Funeral services will be held at Davis Funeral Home in Riverton, Wyoming, on Friday, May 8th, 2015, at 3:30 p.m. with graveside service to follow at Mountain View Cemetery.

The family invites you to join them for dinner and a celebration of Betty’s life at The Reach Foundation, 622 North 8th Street West, Riverton, WY, beginning at 5:30 p.m.