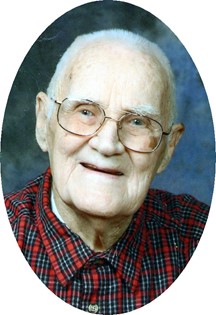 Guestbook 4
Frank J. Miller, 96, formally of Riverton, WY died on Thursday, May 14, 2015, at the Hospice of Dayton in Dayton, OH. Funeral services are scheduled for Thursday, May 21, 2015, at 10:00am at Davis Funeral Home. Knights of Columbus rites will take place. Burial will follow at Mountain View Cemetery.

Frank J. Miller was born on January 8, 1919 in Richmond, IN to Daniel and Margaret “Mary” (Kenney) Miller. He was one of eight children, four brothers and three sisters.

He was of the Catholic faith and was a 4th Degree Knight of Columbus.

As of lately, Frank was a member of Immaculate Conception Church and also a member of Knights of Columbus Council 500 in Dayton, OH

On August 6, 1939 he married his wife of seventy years, Madonna Smith. She passed away on December 16, 2009.Together they had four children, three boys and one girl. They lived in Dayton, OH raising their family while he worked for Duriron as a steel worker.

After retiring he and his wife moved to Colorado and then in 1990 they moved to Riverton making it their home for 30 years before moving back to Dayton to be close to family.

He was preceded in death by his wife, Madonna Miller; his parents, Daniel and Mary Miller; his brothers, Daniel Miller, George Miller, Woody Miller, and Clarence Miller; his sisters, Millie Hinshaw, Francis Schwarts, and Martha Heinz; and his sons, Michael L. Miller and Joseph F. Miller. Frank will be laid to rest with the Lord in Riverton, WY beside his wife Madonna and son Michael. He will be dearly missed by family and friends in Dayton, OH, Texas, and Wyoming. Frank will also be missed by his special K-9 friend, Spanky.