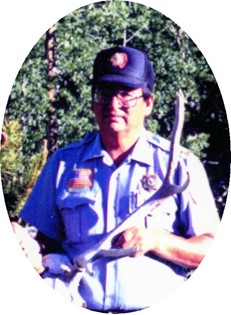 Howard Arnel, of Riverton, WY, died on Friday, May 22 at home surrounded by family and friends. He was 64 years old.

A memorial service will be held at 10 a.m. on Thursday, May 28 at Rocky Mountain Hall in Fort Washakie, WY with full military honors. Howard Arnel was born on October 3, 1950 in Fort Washakie, WY to Howard Guina and Louis Meeks and was later adopted into the Faulkner family. He graduated from Lander Valley High School with the Class of 1969.

After graduation, Howard enlisted in the United States Army and served in the Vietnam War. While in service he served in the 1st Calvary Division as a Recon Sniper. Howard was honorably discharge in 1975 and was awarded numerous medals including two Purple Hearts and a Bronze Star.

On March 27, 1988, he married Sallie Ann Bearpaw in Las Vegas, NV. They lived in Crowheart, WY for over 20 years before moving to Riverton, WY.

Throughout his life, Howard was always known as a hard worker. He worked for U.S. Steel at the Atlantic City Mine and in 1988 he attended Policy Academy in Arizona and became a patrolling officer for the Wind River B.I.A. He later became a Game Warden for the Shoshone & Arapaho Fish & Game and eventually a rancher. He then retired to spend more time with his family and to help raise his grandkids.

Howard’s family said that he enjoyed fishing, camping, and hunting with his kids and grandkids. He was an avid rock hound, wood carver, and silver smith. He loved to go on walkabouts, tell stories, watch sports, and just be around his grandchildren.

He was preceded in death by his sister Wynona Hillger and his parents.

In lieu of flowers, donations may be made on behalf of Howard Arnel to the Wounded Warrior’s Project at www.WoundedWarriorsProject.org. in care of the Davis Funeral Home, 2203 W. Main Street, Riverton, WY 82501.

Services under the direction of Davis Funeral Home. On-line condolences may be made to the family at www.TheDavisFuneralHome.com.