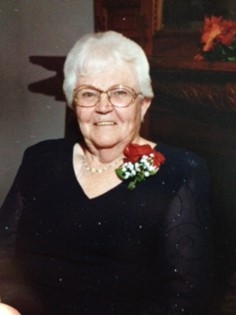 Emilie was born October 31, 1924 in Lovell, Wyoming to Gottfried and Sophie (Fink) Miller, who were Germans that immigrated to America from Russia. She was baptized on November 30, 1924 and confirmed in 1938. In Lovell she attended Lutheran schools and remained an active member of Trinity Lutheran Church in Riverton.

Paul and Emilie farmed in the Powell area until March 1965 and in the Riverton area until 1970. After retirement, they did extensive traveling in their motor home. Emilie also enjoyed sewing, quilting, gardening and spending time with her family. She loved her big family and made every effort to attend weddings and graduations of her entire family. She was an avid sports fan and loved to watch the Colorado Rockies, Denver Nuggets and Denver Broncos every chance she got.

She was preceded in death by her parents; brothers Johnny, Fred and John; sisters Elizabeth, Dorothea, Katherine (Kate), and Theresa (Rosie).

Memorials may be made to Trinity Lutheran School of Riverton, care of the Davis Funeral Home, 2203 W. Main St., Riverton, WY 82501.