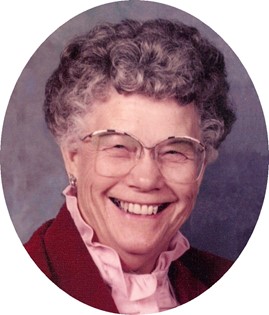 Guestbook 0
Ruby J. Jeffres of Riverton died Monday evening, March 10, 2008, at Westward Heights Care Center in Lander. She was 85 years old. Funeral services will be conducted at 2 p.m. on Friday, March 14, at St. Margaret's Catholic Church in Riverton with the Rev. Father Andrew Duncan officiating. Interment will follow at Mountain View Cemetery. A viewing will be held from 5-7 p.m. on Thursday, March 13, at the Davis Funeral Home of Riverton with a rosary following at 7 p.m. Ruby Josephine Crail was born in Crawford, Neb., on Nov. 1, 1922, the daughter of Robert William Crail and Veota Mae (Hymer) Crail. She attended elementary school in Hiland, Wyo. and moved to Lander, where she was graduated from high school at Fremont County Vocational High School with the Class of 1940. She was awarded a business scholarship. On Nov. 7, 1941 she married Charles Earl Jeffres in Crawford, Neb. Mrs. Jeffres was a ranching partner with her husband in the family operation, and her family said she was a ranch wife in every aspect. Mr. and Mrs. Jeffres began ranching in Sinks Canyon, moving to Pavillion in 1956. They raised their family there and ranched 180 acres there until retiring in 1981. They moved into Riverton in the early 1990's. Mrs. Jeffres attended St. Edward's Church during the time they lived at Pavillion, becoming a member of St. Margaret's Catholic Church when she moved into Riverton. She had been a member of the Altar Society. She was active in 4-H as a leader, was a member of a pinochle club, and enjoyed square dancing. She was also a member of the Fremont County Cowbells, Wyoming Dairyman's Association and the Riverton Senior Citizens Center. Her family said she was devoted to being a homemaker, enjoyed gardening, painting, sewing, baking, spoiling the grandchildren. She also enjoyed, with her husband, hunting, fishing, traveling, playing cards, spending time at the cabin, snow machining, spending time with family. In addition, she always supported her children's school and sports activities. Among her survivors are sons, Bob Jeffres and his wife Joanne of Riverton, Tom Jeffres of Casper, Jim Jeffres and his wife Chris of Lander; daughter, Mary Jo Jeffres of Butte Mont.; grandchildren, Lynette Jeffres of Riverton, Roberta Jeffres and Larry Feagler of Torrington, Carla and Grady Scheer of Dickinson N.D., Ann Marie Roccaforte of Springfield, Oregon, Shannon Brown of Andover, Kan., Heather Jeffres of Riverton, Lesley and Travis Pearson of Lander, Meaghan Jeffres of Lander, Steve and Kelly Drake of Rock Springs, Lisa Drake of Lander, Tami and Rick Marshall of Rock Springs, and 11 great grandchildren; a sister, Mary Ann Homec of Lander; brother, Joe Crail of Dubois, and close friend, Gladys Hansen of Lander. Mrs. Jeffres was preceded in death by her husband, Charles Jeffres; her parents, Robert Crail and Veota Mae (Hymer) Crail; one brother, Robert Crail, Jr. (Bud); two sisters Henrietta, (Crail) Hegstrom and Cecilia (Crail) Terry. Memorials may be made to Little Wind Hospice, c/o Davis Funeral Home, 2203 W. Main Street, Riverton, WY 82501. On-line obituaries are available and condolences for the family may be made at: thedavisfuneralhome.com Services are under the direction of the Davis Funeral Home of Riverton.