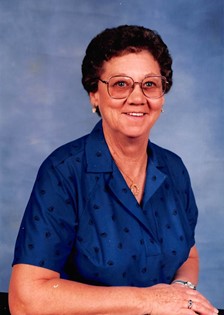 Guestbook 4
Kathryn “Lucy” McGraugh-Kelsey, 88, of Riverton, died on Saturday, June 20, 2015, at Kindred Nursing and Rehabilitation – Wind River. A memorial service will be held on Monday, June 29, 2015, at 2:00 pm at Davis Funeral Home. Pastor Robin Stupka will officiate. Inurnment will take place at a later date at the Freeland Cemetery in Casper.

Kathryn Lucille McGraugh was born on June 11, 1926 in Freeland, WY to Edward L. McGraugh, II and Mary Ann (Falkenburg) McGraugh. She grew up on the family ranch, Bates Hole, and attended a one room school house with her one brother and three sisters until she started high school. She and her sister had to board in Casper while attending high school. They would return to the ranch when school was out and work through the summer. She lived at the ranch for some years before she met Albert L. Kelsey.

She and Albert were married on June 19, 1946. They stayed on the family ranch where their son, Edward “Oscar” E. Kelsey, was born.. A few years later they moved to Dubois where Albert was in the timber industry. While she was a homemaker and raising their sons, she was also the bookkeeper at the Coast to Coast Store that she and Albert owned and operated. They later owned and operated a construction business and again she was the bookkeeper. In all of their business adventures she was always the bookkeeper and kept things in line. Due to health issues they moved to Riverton to be closer to medical facilities. She was one of the first to have open heart surgery at Lander Medical Center which blessed her with many more years to enjoy live. She continued to live in Riverton until she passed.

She was a member of the Eastern Star and Women’s Auxiliary of the V.F.W.

Her family said that she never lost her love for the ranching lifestyle and simply loved the outdoors. She LOVED to fish, snowmobile, and was an amazing shot with a 22 rifle. She also enjoyed dancing, bowling, and her beloved roses that she grew. She just loved life and everything it had to offer.

She was preceded in death by her parents, Edward and Mary Ann McGraugh; her brother, Bud McGraugh; her two sisters, Verna McGraw and Fern Watson; her husband, Albert Kelsey; her daughter, Peggy Sjalin and her grandson, Sean Sjalin.

Memorials may be made to Friends of Hospice for Frontier Hospice in care of Davis Funeral Home, 2203 West Main Street, Riverton, WY 82501.