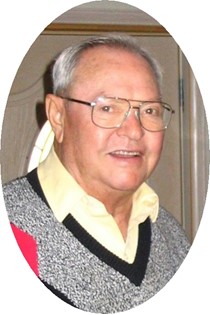 Bob was born on December 22, 1930 in Wheatland, WY to Luther Marion and Ella Mae (Marlow) Strickler. He grew up with his brother and two sisters, in Wheatland. He graduated high school from Wheatland High School where he was all state in both football and basketball. He then attended Casper College for a year.

On June 18, 1950 he married his wife of 65 years, Dorothy Beth Bennett. They lived in Casper raising their four children while Bob worked for Shell Oil CO. and later was manager at the Casper Country Club. In 1974 the family moved to Riverton where Bob was the Allstate Insurance agent. After retiring, they continued to live in Riverton.

Bob was a very active member of the communities he lived in. He was President of the Wyoming Oil Scouts Association, on the Board of Directors of Riverton Memorial Hospital, President of the Riverton Lion’s Club, Republican Precinct Committeeman, Vice-Chairman and State Committeeman of Fremont County Republicans, President and Treasurer of Central Wyoming Retriever Club, Member of Advisory Board of Great Plains Insurance Company, and Charter member of the Riverton Country Club.

Although he was very involved with his community, he always made time to be with his family and enjoyed hunting, fishing, camping, golfing, and football.

He was preceded in death by his parents, Luther and Ella Strickler; his sisters, Mary Howard and Annesta Zoe Parr; his brother, Jimmy Strickler; and his daughter, Donna Strickler.

Memorials may be made to St. Margaret’s Catholic School in care of Davis Funeral Home, 2203 West Main Street, Riverton, WY 82501.