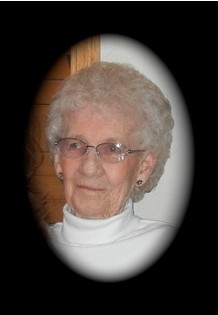 Hazel Algine Alexander was born on March 15, 1928 in Webb, IA to Algie and Audra (Ballah) Alexander. She grew up in the Garfield and Webb, IA area and graduated school from therer.

She married Merle M. Mills on February 3, 1948 in Greenville, IA. Shortly after their marriage they moved to Riverton and started farming and their family. Together they raised four children. She remained on the farm until her retirement when she moved into town.

She was a prescient election judge at Midvale, WY for approximately 20 years.

She is survived by her son, Michael Mills of Newcastle, WY; her daughters, Michella Marie Smith of Riverton, WY, Melynda Mae May of Marbleton, WY, and Marlana M. Wood, of Athens, GA; her brother, Estel Alexander of Ft. Dodge, IA; and her eight grandchildren and sixteen great grandchildren.

She was preceded in death by her parents, Algie and Audra Alexander; her husband, Merle M. Mills; and various sisters and brothers.

Memorials may be made in the memory of Hazel Mills in care of Davis Funeral Home, 2203 West Main Street, Riverton, WY 82501.