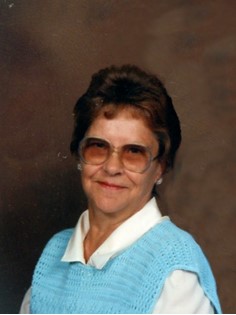 Funeral services will be at 10:00 a.m. on Monday, August 17, at Davis Funeral Home. Burial will follow at Mountain View Cemetery.

Alberta was born September 29, 1931 in Hawk Springs, Wyoming the daughter of John D. and Bernice (Hacker) Smith. She was the oldest of three children. She had a brother, Dorland Smith and a sister, Janice (Smith) Hawkins.

When she was in school, she liked participating in track events and won several blue ribbons. She attended school through the 8th grade. During harvest time, she helped her aunt and uncle dig and pick potatoes and onions and placing them in 50# sacks.

Her family later moved to Torrington Wyoming where she babysit and later worked at the sale barn cafe, as a dishwasher and waitress. When she was 16 years old, she met Joseph Lepp in Torrington, who had just been discharged from the Navy. They were married on March 20, 1948. They raised two daughters: Emma Lou and Sandra Mae.

They lived in Torrington for a few years when Joseph worked at the bean elevator. During this period, Alberta was a waitress at a local café. Then they moved to Morrell Nebraska and farmed for several years.

In April of 1964 they moved to Riverton. Alberta worked at the Teton, Rainbow and Ranch Kitchen cafes as a waitress. Future employment was at Katherine Gray soap factory, and assembly work at Datel and Brunton Company.

Alberta and Joe retired sometime during 1980 and moved to Dubois on Union Pass to live in the cabin they had built in the mid 70’s. There they had many happy years enjoying their family, especially the five grandsons, playing games, fishing, riding trail bikes and snowmobiling.

In 1988 they moved back to the Riverton area and bought a house on Cliff Road where they enjoyed a big yard and garden. They also enjoyed buying and fixing old houses for rentals. Alberta enjoyed family events, grandchildren, gardening, making rugs, crocheting, watching TV game shows, and going to the casino.

She was preceded in death by her husband Joe Lepp on September 10, 2013, parents and brother.

Memorial contributions may be made to the Riverton Senior Citizens Center in care of the Davis Funeral Home, 2203 W Main, Riverton, WY 82501.

Arrangements are under the direction of the Davis Funeral Home of Riverton. Online condolences may be left at www.thedavisfuneralhome.com.