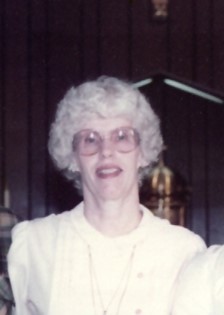 Guestbook 0
A celebration for the life of Eleanor L. Wells of rural Riverton will be at 10 a.m. Monday, March 24, at St. Margaret's Catholic Church in Riverton. The Rev. Father Andrew Duncan will officiate. Burial will follow at Mountain View Cemetery in Riverton. There will be a rosary at 7 p.m. Sunday, March 23, at St. Margaret's. Mrs. Wells died on Wednesday, March 19, 2008, at the Poplar Living Center in Casper after a long illness. She was 80 years old. Eleanor Lucretia Chaney was born in Maryville, Mo., on Feb. 11, 1928, the daughter of Charles Nelson Chaney and Mary Alice (Roberts) Chaney. She grew up and attended school in Maryville. She worked as a waitress at the 71 Café in Maryville and there met Paul Clifford Wells. They were married in Maryville, Mo., on Nov. 27, 1949. They first moved to Riverton in 1956, went on to Los Angeles, Calif., in 1965, and returned to Riverton in 1971. Mr. Wells had been an employee of the city of Riverton until his retirement. Mrs. Wells was a member of St. Margaret's Catholic Church in Riverton where she was active in the choir for many years and worked through the R.C.C.W., providing food and cooking for funeral dinners and cleaning the church. Her family said she enjoyed the outdoors, gardening, reading, family, sewing, needlework, and loved music. Mrs. Wells was a housekeeper, did ironing, was a babysitter, and waitress. Survivors include daughters, Marcia Collins and husband Ron of Elko, Nev., and April Olheiser and husband Leverne "Vern" of Riverton; grandchildren, Jakob Olheiser and wife Danielle, Tracy Shepardson and wife Jo, Diana Barcheers, Donna Hoggatt and husband Orson, Denise Olsen and husband Johnny, Dee Niu and husband Moe, Darla Shepardson, Terry Shepardson; numerous great grandchildren. She was preceded in death by her husband, Paul C. Wells on June 3, 1998; a daughter, Marlene Shepardson; son-in-law, Bob Shepardson; granddaughter, Debra Howard; sisters, Mary Kay Maddox and Miriam Hyde. Memorials may be made to the St. Margaret's School Music Program, in care of the Davis Funeral Home, 2203 West Main, Riverton WY 82501. On-line obituaries are available and condolences for the family may be made at: thedavisfuneralhome.com Services are under the direction of the Davis Funeral Home of Riverton.