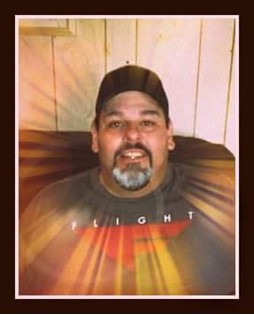 Guestbook 4
Raul Narcizo Blanco, 45, of Arapahoe diedon September 24, 2015 at the Wyoming Medical Center in Casper, WY. A rosary will be recited on Monday, September 28, 2015, at 7:00pm at St. Stephen’s Catholic Church. A wake will follow at 1562 17 Mile Road, the Hanway residence. A funeral service will be on Tuesday, September 29, 2015, at 2:30 pm at St. Stephens Catholic Church with Father Phil Wagner officiating. Burial will follow at the Arapaho Catholic Cemetery,

Raul Narcizo Blanco was born July 10, 1970 in Los Angeles, CA to Raul Narciso Blanco and Carol Mae Hanway Blanco. His godparents were Maxine Piney and John Blanco. He grew up and attended schools in Hacienda Heights, CA. He earned his associates degree in Business at the local college. He moved to Wyoming in 1994 and remained here until his passing.

He worked as a truck driver, at Champions Auto Part Store, as surveillance at the Wind River Casino and security at the Shoshoni Willow, and was a bus driver for St. Stephen’s Indian Schools.

He is survived by his companion for the last eight years, Cathy Dodge; his brother, Paul Blanco; his father, Raul Blanco; his granddaughter, Tayla Gambler; his dog, Gus; and numerous nieces, nephews, cousins, aunts, and uncles.

He was preceded in death by his mother, Carol Mae Blanco; his grandparents, Ernest and Nellie Hanway and Raul amd Marie Louise Blanco.