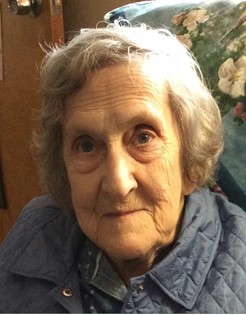 Guestbook 4
Evelyn Joyce Wunder passed away peacefully October 14, 2015 in Casper, Wyoming. Evelyn was born Septemer 16, 1931 the daughter of Daniel Rodeman and Lillian Shimek Rodeman in Hemingford, Nebraska. She attended and graduated from high school in La Grange, Wyoming. Evelyn married Edward Wunder, Sr. in August of 1949. The couple made Riverton their home in 1953. Ed and Evelyn lived in Rawlins, Wyoming from 1965 until 1971 when they then returned to Riverton. She was active in various organizations during her lifetime including Jaycees, BIOE Does, Eagles Auxiliary, quilt quild, and art guild. In her earlier years in Riverton she taught piano, played the piano for many weddings and funerals of family and friends. Due to declining health she moved to Shepherd of the Valley Nursing Home in August of 2013. Although the last few years were challenging she made the best of her situation and always kept her positive attitude and generous nature. Cremation has taken place and no services are planned. Scattering of the ashes by the family will take place at a later date. Evelyn was preceded in death by her parents, husband Edward Wunder, Sr. and sister Marilyn Alexander. She is survived by four children, Edward Wunder Jr. and wife Katie, Bill Wunder, Steven Wunder, and Susan Forsberg and husband Dale, as well as four grandchildren Casey, Nicholas, Crystal and Stevie Ray, and sisters Shirley Henderson, Caroline Johnson, Edris Wilson, Sharon O’Neill and brother Charles Rodeman. Memorial contributions may be made to Central Wyoming Hospice and Transitions in Casper, WY.