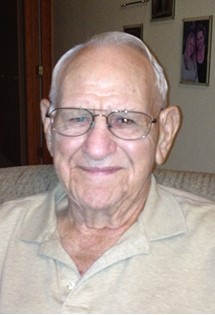 Robert Rein was born in Riverton on October 27, 1925 to Georg and Margaret (Beleth) Rein. He was raised on the family farm along with his two brothers and three sisters. He attended schools in Riverton.

He was baptized and confirmed into the Lutheran faith and was a strong believer.

On November 27, 1957 he married Beatrice “Bea” Fairbairn in Riverton, WY. Together they raised their five daughters on the farm that they ran.

Bob was a second generation farmer along the Wind River where he was born and raised. He was involved in many agriculture ventures from growing sugar beet in the early years to corn silage for cattle feed and ultimately raising malt barley for Adolph Coors Company. He retired from farming in 1997.

He was awarded the Ag Man of the Year by Riverton Chamber of Commerce the year he retired, a very fitting end to his farming career. He was also a board member of the Riverton Valley Irrigation District from February 1980 until October 2105 and the Big Ben Drainage District, 1972-1974. He also belonged to the Fremont County Historical Society and The German’s from Russia Society.

When he wasn’t farming he enjoyed fishing hunting and was an avid fan of the Riverton Wolverine Football team and was a member of the Cowboy Joe Club.

He was preceded in death by his parents, Georg and Margaret Rein; his brother, Georg Rein; and his sisters, Gretchen Dose, Marie Quinn, and Ruth Dow.

Memorials may be made to the “Robert Rein Agricultural Scholarship” through the Central Wyoming College Foundation in care of Davis Funeral Home, 2203 West Main Street, Riverton, WY 82501.