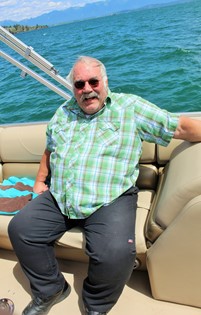 Mark Allen Hoock was born on December 11, 1950 in Keokuk, IA to Harry Joseph and Mariellen (Reed) Hoock. He and his sister grew up in Illinois and Alaska. He graduated from high school in Alaska.

After graduation he joined the U.S. Army and served in the Vietnam War. He was honorably discharged and return to Alaska.

While he was in the military service he was baptized into the Jesus Christ of Latter Day Saints faith.

On November 18, 1972 he married Oma Rose in Cordova, Alaska. Together they raised three sons.

He belonged to the volunteer fire department and ambulance crew while he lived in Alaska. He became a member of the Riverton Veterans of Foreign Wars Post #3628 when he moved to Riverton.

When he was younger he raised midget cars with his family and that became a live long enthusiasm for cars and racing, whether he was watching or participating. He also enjoyed collecting coins but above all he loved fishing and again it was something he started when he was young and his passion and love for the sport grew over the years to where he knew exactly what to use in every fishing situation he came too, he also passed it along to his sons.

He is survived by his wife of 42 years, Oma Hoock; his sons, Jeff Hoock of Great Fall, MT, Joe Hoock of Kalispell, MT, and Joshua Hoock and his wife Amy of Thermopolis, WY; his sister Vickie Conway and her husbanc, Robert of Kingman, AZ; and his seven grandchildren. He was preceded in death by his parents, Harry and Mariellen Hoock.