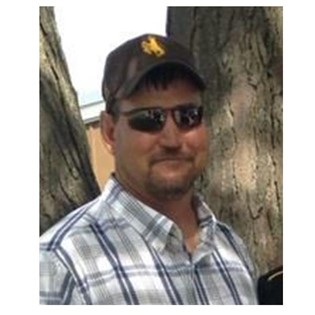 Guestbook 2
Michael S. Kenyon, 45 passed away on October 26, 2015 from an accident at his home in Pine Haven, Wyoming. A private family viewing will be held on November 4, 2015 at 10:00 am. followed by an informal celebration of life and luncheon to be held at the Camplex Heritage Center Lobby at noon.

Burial will be at the Lakeview Cemetery in Shoshoni, Wyoming on November 7, 2015 at 10:30 am at which time there will be a graveside service for both Michael Kenyon and Ellen Kenyon with a luncheon to follow at the Shoshoni Senior Citizens Center at noon.

Mike was born on April 10, 1970 to Albert H. and Wanda (Manchester) Kenyon, III in Riverton, Wyoming. Mike was raised in Shoshoni, Wyoming and graduated high school in 1988 and went on to attend one year of college in Powell, Wyoming on a band scholarship.

Mike moved to Elko, Nevada in 1989 to work for Barrick Gold Strike as a equipment operator later moving to a training position. In 1996 Mike married Stacy Baughn and to this union, one cherished son, Ryan Michael was born. He also became the stepfather to Stacy's three children Jessi, Jake and Tyler whom he loved as his own. They moved to Gillette, Wyoming in 1998 and later divorced. On September 5, 2009 Mike married his love and best friend Melissa K. Riggs and with this union he became the stepfather to Melissa's two beautiful daughters Cassidy and Chelsea. Mike loved the girls as the daughters he never had. Mike's wife and children meant everything to him.

While in Gillette, Mike worked for Peabody Coal as an equipment operator for 7 years. At the time of his death Mike had been employed at Alpha Coal for 10 years and was currently a General Coordinator at the Eagle Butte Mine. He was the Captain at Skippys Pub and Restaurant in Pine Haven which he owned with his wife Melissa.

Mike was a loving husband, father, son, brother and uncle. Mike most enjoyed spending time with his family and friends, working and cooking at his bar, sharing a laugh, drinking a beer, watching football, riding his motorcycle, golfing and just enjoying life. Mike was an avid Pittsburgh Steelers fan and this was something he could share with his brother Albert who also loves the Steelers. Mike once said that he was living his dream. He always wanted to own a bar and restaurant and getting to share it with Melissa was a bonus. He also loved to travel to new and interesting places and meet new friends. He never knew a stranger; he could strike up a conversation with anyone. He was much loved by his family, the community of Pine Haven and the patrons and employees of Skippys.

Mike is survived by his wife Melissa, his son Ryan Michael Kenyon and his daughters Chelsea Smith and her husband Logan, and Cassidy Riggs. His father Albert H. Kenyon III, his brothers Albert Kenyon IV, Monte Forster and his wife Punky, Mike Forster and his wife Sarah and his sisters, Deborah Smith and her companion Bill Gelatic, Debra McMurtrey and her companion Jack Mecham. Numerous aunts, uncles, nephews, nieces and cousins as well as many cherished friends.

He was preceded in death by his natural mother Wanda K. Forster, his paternal grandparents, Albert and Pauline Kenyon, his maternal grandparents Sheldon and Audrea Manchester. His second mother Ellen Kenyon followed Mike in death only twelve hours later. Mike held open the doors to heaven and they are rejoicing that Ellen is no longer suffering from her extended illness. They will continue to watch over all of us together.

The family requests that memorials be made to the Tuberous Sclerosis Association in Mike’sd name.