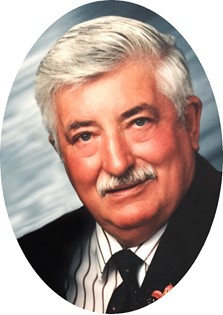 
William Barclay Ramage of Lysite died on Friday, November 6, 2015 at Sage West Hospital in Riverton. He was 84 years old.

Bill was born on January 14, 1931 in Shoshoni, Wyoming, the son of Wanda Feigh (Barclay) Ramage and William Elliot Ramage that homesteaded in the Lysite area. He lived his whole life in the Lysite community, attending grade school there and then traveled and boarded in Casper during the school years so he could attend Natrona County High School. He graduated in 1949 from NCHS and then attended Casper College. He would return to the ranch some weekends, at times even having to hitchhike to Moneta. From there, he would often walk the eight miles to Lysite.

Bill married Margaret Jane Apland on September 1, 1951 and then ran the Ramage Ranch Company with his sister Mavis Braddock, wintering sheep on Lysite Creek and summering in the Big Horns. In 1958, Bill and Mavis acquired the Lysite Store and Mavis served as Postmaster for a short time, with Bill taking over the position and eventually retiring as Postmaster. He even recalled John Wayne visiting the store. Margaret, after being married to Bill for 64 years, has moved to Riverton.

His family remembers Bill a kind, generous, and intelligent man that loved to make friends and BS with everyone. He loved animals and was constantly surrounded by his dogs Norman and Queenie during their pet lives. As a young man, he was excellent with horses. He had a phenomenal memory and loved to share his knowledge of the world on weekend drives and trips around the west, and Hawaii, an Alaskan cruise, and even to Costa Rica. Two adventures he loved to recall were a trip to the Sugar Bowl in 1968 to watch the Wyoming Cowboys and a fishing trip to catch marlin off the Baja Peninsula in Mexico. Bill was a great storyteller with a grand sense of humor and could mimic the voices of all his story's characters from different countries. He taught himself Spanish and continued to practice with whomever came long that spoke it. He was incredibly strong in his youth but also had a creative side liking to write poetry and sing funny songs. He served on many boards in public service including the recreation board, the school board, and others. Bill was a man of God, serving as a deacon in his church. He loved and cared for his family immensely. He maintained friends all over the country and even wrote relatives back in Scotland. Many knew him as quite the prankster. In recent years, he took to texting and the iPad and his kids would often get jokes and stories that would make them laugh and be reminded of his wit and charm.

Bill was preceded in death by his father in 1958, his mother in 1986, and his sister in 2011. He survived a really tough struggle with lymphoma and made a full recovery. Memorials may be made to the Shoshoni Senior Center in care of the Davis Funeral Home, 2203 West Main Street, Riverton, WY 82501

Funeral services will be at the Davis Funeral Home of Riverton on Friday, November 13, at 1 p.m. with burial at Lake View Cemetery in Shoshoni and a reception at the Shoshoni Senior Center.