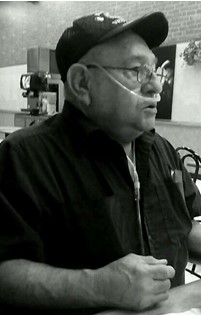 Antoine Weed Day was born on December 19, 1941 in Fort Washakie, WY to Wilmer Weed and Madeline (Lawton) Day. He grew up in the Fort Washakie area and attended schools there.

He believed in the Creator and the Native American Traditions which he practiced.

He enlisted into the U.S. Marines in 1957 and served in the Viet Nam War. He made the military a career for twenty years before serving in the reserves for another ten years, retiring after thirty years with a honorable discharge.

On April 20, 1964 in Rigby, ID he married Clementine “Tina” Harris. Together they raised four children while moving with the military. They were married 51 years.

While in the service he was stationed in Viet Nam, Guantanamo Bay, and Okinawa, Japan. He was a Drill Sargent at Camp Pendleton in Ocean Side, CA before he retired in 1979. After retiring he returned to Wyoming where he worked for Shoshone Enterprises, owned Western Saddlery in Lander, and worked for “Chuck” at Melody Liquors.

He was a man of many talents, he was a gun smith, a leather craftsman, enjoyed doing carpentry and was always busy. He also played computer games and really liked them.

He is preceded in death by his parents, Wilmer and Madeline Day, his grandparents, and several brother and sisters.