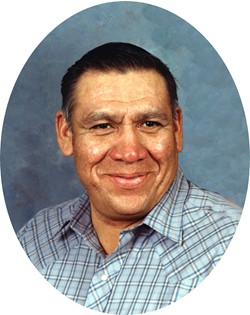 Reuben Earl St. Clair was born on May 14, 1937 in Fort Washakie, WY to Wallace and Winnie (Welch) St. Clair. He was given his Indian name of Be nee so Bctee translated to Big Heart. He grew up in the Fort Washakie area and attended grade school there. He went to Haskell Indian School in Lawrence, KS and he also attended Casper College where he became a Carpenter/Apprentice.

He married Margaret M. Spoonhunter on December 11, 1964 in Lander, WY. They made their home in the Arapahoe area where they raised their family.

He worked various construction jobs throughout Wyoming, some of the areas were, Cheyenne, Laramie, Saratoga, Rock Springs, Lander, and Sheridan. He worked for the Bureau of Indian Affairs, the Eastern Shoshone Tribe and Wind River Housing.

He enjoyed reading, hunting, fishing, watching old Western movies and sports. He loved to attend his grandchildren’s activities when he was still able to.