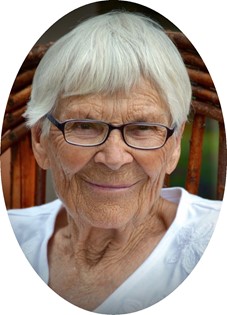 Helen K. Milnor was born on April 5, 1923 to Floyd and Jean (Love) Milnor on a small farm east of Denver, CO. While she and her sister where growing up, they attended schools in Colorado. Helen graduated from Colorado State University in 1944 with a teaching degree.

After college, she taught high school in Colorado Springs, CO where she met George M. Danielson. On October 1, 1946 they were married. Their union was over 62 years before George passed in 2009.

They then moved to Wyoming where they lived in several town while raising their son and daughter. After George retired in 1976, they lived and worked in Lesotho, Africa for two years before moving back to the United States to spend summers in Lander and winters in Mesa, Arizona.

Helen was a loving wife, a devoted mother and a strong Christian with a sweet and kind soul. She was always active in the churches she attended.

When George was alive, they loved to hike in the desert and travel the world. Helen loved to knit, read, and do handwork.

She is survived by her children, Lynnette K. Reitz and her husband, John and Scott Danielson and his wife, Elizabeth K.; two step grandchildren, Kurt Reitz and wife, Nicole and Kristen Reitz-Green and he husband, Vince; and four great grandchildren.

She was preceded in death by her parents, Floyd and Jean Milnor; her husband, George Danielson; and her sister, Dorothy.