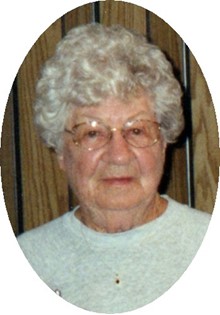 Guestbook 11
Alma Woodard, 95, of Riverton, passed away in peace on Thursday morning, April 21, 2016, at the Help for Health Hospice Home. The viewing will be on Wednesday, April 27, 2016, at Davis Funeral Home from 5:00 pm to 7:00 pm. A Celebration of Life will be held at Davis Funeral Home on Thursday, April 28, 2016, at 2:00 pm with Irene Houser officiating. Burial will follow at Mountain View Cemetery.

Alma Irene Sauer, the eldest of 10 children, was born on September 6, 1920 in Baynard, NE to Henry and Mary Sauer. In March of 1935 the Sauer family move to Riverton, WY.

Alma worked for the Knight Theaters in all capacities including accounting, before fulfilling her lifelong dream of owning her own sewing shop. In 1971, she saw her dreamed realized and opened, “Alma’s House of Sewing”. Being an expert seamstress herself, she was always happy to help her customers out with sewing problems, she even taught some people how to make their own undergarments. Alma often said, “I do love to help keep alive the tradition of hand making their own clothing”.

In 1985, Alma retired from working and sold her shop. Alma went on spending her life with family and friends and traveling to places like Canada and Jamaica. She was also a very avid bowler, winning many championships even up until 2004.

Alma was an active member of the United Presbyterian Church and served as a Deacon for two terms. She was also a charter member of the Eagles alongside her husband for a short time.

Alma enjoyed being outdoors, planting flowers, and enjoying family getting together and barbeques. Even up into her early 90’s she completely loved going 4-wheeling with her son, Lonnie.

In the winter month’s she retired to the indoors where she made candy for everyone, spent time on doing many puzzle, along with her daughter, Cheri, and son-in-law, Mike (who were also her care givers in the last four years of her life), along with a great grandchild or two who like helping her with the puzzles.

Alma loved her family and being part of each of their lives. She was always the bond and simply loved living life around people, kind hearted and ready to help instantly. Her greatest legacy has been her treatment of others, always loving, and never arguing.

She will be greatly missed, but always loved.

Alma was proceeded in death by both her parents; her husband, Donald E. Woodard; her son, Randy; and her brothers, Ernest, Harold and Gene Sauer.

Memorials may be made to Help for Help Hospice Home in care of Davis Funeral Home, 2203 West Main Street, Riverton, WY 82501.