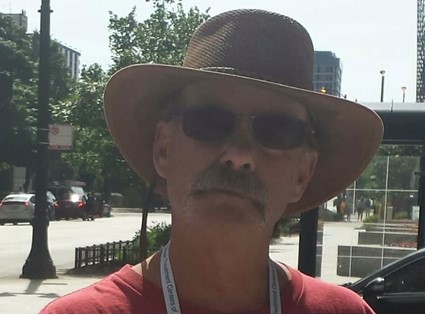 Guestbook 1
Dale E. Leseberg, 60, of Riverton died Thursday evening, September 1, 2016 at the Help for Health Hospice Home. Graveside service will be 1:00 pm, September 17, 2016, at the Mountain View Cemetery. Please bring your favorite memories in photo or letter form to be placed in the grave. Everyone is invited to an Irish Wake to follow at 17 Dalley Road.

Dale Edward Leseberg was born July 21, 1956 in Casper, Wyoming to James Vandervort Leseberg and Roberta Jean Kier Leseberg. Dale spent his childhood in Fremont County, lived in Rock Springs, Wyoming for 27 years where he received his Associate of Science Degree in Computer Science at Western Wyoming Community College. He lived in Riverton, Wyoming since 2009.

Dale was self-employed since 1994 building solar generators in the oilfields retiring in 2011 to follow his dream of being a farmer in Fremont County. He named his farm “Marie’s Garden” in memory of his sister.

On May 29, 2010 he married Leisa Carol Woods in Lander, Wyoming. His family said he enjoyed farming, collecting Farmall tractors, recording movies, and proclaimed himself as a gourmet cook. He made his first lathe in 4th grade from a mixer motor.

He is preceded in death by his sister, Marie Louise Leseberg; and step-daughter, Courtney Buskohl Cox.

Memorials may be made to Help for Health Hospice in care of the Davis Funeral Home, 2203 W. Main Street, Riverton, WY 82501.