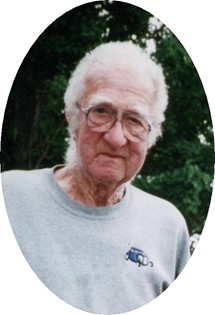 Guestbook 0
Robert E. Frank, 90, of Riverton died September 1, 2016 at the Help for Health Hospice Home in Riverton, Wyoming. Cremation will take place and a memorial service will be held in Corydon Cemetery, Pennsylvania at a late date where his ashes will be buried with his wife.

Robert Edward Frank was born February 28, 1926 in Onoville, New York on the Allegany Indian Reservation to Edward George and Myrtle Mae (Hunsinger) Frank. He grew up in Onoville attending grade school in a one room school near Peter’s Creek. He graduated from Randolph Central School in Randolph, New York. He served in the Army during WW II in the 7th Armored Division in Germany in the Battle of the Bulge. He married Marilyn Ruth (Putnam) on Sept. 9, 1947 in Portville, N.Y. The couple had four children.

His family said he loved working as a mechanic, loved racing stock cars when he was young especially his 33X Ford, working on cars, trucks, and engines, he was a life member of the NRA which he believed very strongly in. They said he participated in snow snake throwing competitions on the Seneca Indian Reservation.

He was preceded in death by his wife, Marilyn in 2004; his parents, Edward G. and Myrtle Frank; brother, Richard Frank and sister, Leona Bunker.