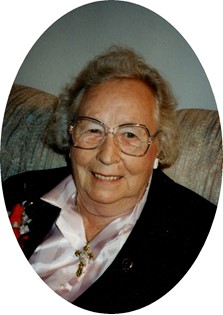 Irva Lange of Riverton died on Wednesday, October 05, 2016, at the Help for Health Hospice Home.

Irva Myrtle Longmore was born on December 18, 1920 in a sod house south of Callaway, NE to William and Etta May (Weaver) Longmore. She grew up and attended school in Callaway, NE until she married at 16 years old and moved to Riverton, WY. She finished her education at Pavillion High School earning her G.E.D.

On January 1, 1936 she married Ivan Theodore Lange in Callaway, NE. The newlyweds moved to Riverton shortly after their marriage along with Ivan’s brother. The couple became farmers and were until Ivan’s death from a car accident in 2002.

Irva was a wife and homemaker raising their family of five children and helping tend the family farm. After the children were raised she was a cook at the Fremont Clinic and Hospital for thirteen years and later ran the Airport Café.

Irva was also involved in many organizations including, Riverview Woman’s Club, an Extension Club, for over 65 years, was a leader in Farmer’s Union Youth Group, was of the Christian Faith, where she helped in many areas. She and Ivan were instrumental in starting the Good Sam’s Club in Riverton which they were members of.

Although she was always busy she found time for her hobbies of making and sending greeting cards, gardening, her flowers, sewing, and painting quilt blocks for all the family. One of her adventures was spending a couple winters with her daughter, granddaughter, and family in Hawaii, she enjoyed those winters.