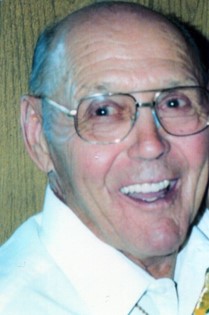 Guestbook 6
Our beloved, Arnold Ison (Arnie) Conley left his earthly journey and was called home to the Lord on Sunday, October 23, 2016. He died peacefully at his home in Riverton, WY surrounded by his family. A memorial service will be held at 3:00 pm on Thursday, October 27, 2016 at the Our Lady of the Woods Catholic Church in Dubois with Father Hiep Nguyen officiating. Full military honors will follow the service.

Arnie was born in Laona, WI on May 18, 1925 to Ed and Grace Conley. He was raised on the family farm in Laona and lived there until he joined the Army at the age of 18. He served proudly and courageously in WW II. Although he would seldom speak of his service, he received a Bronze Star for each of the 5 major battles in which he was involved. He served under General Patton in the European theater and was in the 301st Signal Operations Battalion. He was honorably discharged in 1945.

Arnie and Anita moved from Laona, WI. to Dubois in 1962 where he worked as a timber faller and also at the sawmill, finally retiring from Louisiana Pacific in the 1980's. He then enjoyed working several years with the City of Riverton.

Throughout his lifetime Arnie was an avid outdoorsman who instilled his love of the mountains in his family and friends. He was also a loyal and proud supporter of the VFW, helping to establish the Dubois Ramar Brown Post #10056. He also served as the Chief of Staff for the State of Wyoming VFW in 1972-1973. Arnie served as a local EMT in the Dubois area for several years, and also served as Boy Scout leader for a period of years.

In addition to his family, the greatest legacy Arnie leaves us with his love for people. He did not know a stranger. People just seemed to be at ease around him because of his infectious smile and contagious laughter. He will be dearly missed.

Memorials may be made to Friends of Hospice in care of Davis Funeral Home, 2203 West Main Street, Riverton, WY 82501.