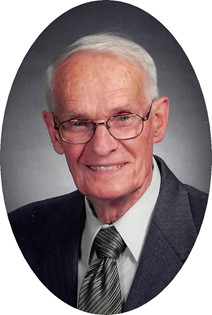 Guestbook 19
Warren Lester, 92, of Riverton, died on Thursday, December 8, 2016, at the Help for Health Hospice Home in Riverton. A Celebration of Life will be held at 2:00 pm on Tuesday, December 13, 2016, at the United Methodist Church. Burial will follow at Mountain View Cemetery.

Maurice Warren Lester was born on January 8, 1924 in Independence Township in Nodaway County, MO to John F. and Eva (Morris) Lester. He was raised on the family farm along with his four siblings. He attended one room schools until his high school years then he went to “town” and in 1942 he graduated from Sheridan High School in Sheridan, MO. He then attended college at Maryville, MO before enlisting in the U.S. Army Air Corps. In 1943.

He was of the Methodist faith and attended the United Methodist Church in Riverton.

He married his first wife, Deloris Howes on January 31, 1946 in Troy, KS. Their first son, Warren Douglas was born August 22, 1948 and their second son, Robert Alan was born September 28, 1951. In 1952 they moved to Montesano, WA when he began to work for Frontier Airlines and in 1954 he transferred to Riverton, WY. In 1960 they moved to New Castle where he worked in Rapid City, SD for a short time before moving back to Riverton. Their third son, Michael Scott was born January 16, 1961 in Riverton, WY.

In April of 1961 his wife Deloris died unexpectedly leaving Warren with three young boys to raise alone while working full time. He had family come out to help for a short time but they had to get back to their responsibilities so he was on his own. He made a commitment to keep his family together and he made it work with the help of his two oldest sons, co-workers, church friends, and neighbors.

On June 3, 1962 he married his second wife, Leda Ann Brown in Riverton, WY. On September 16, 1963, two more sons joined the family, twins, Roger Noels and Rodney Eugene. The family of seven made their home in Riverton. After all the boys were out of the house they moved to Helena, MT and Northglenn, CO where he continued to work for Frontier Airlines. In June of 1986 he retired and they moved back to Riverton, WY. He enjoyed fishing, camping, backpacking and the mountains. He and his boys made many memories over the years spending time together in the mountains. After retirement he was the lead guitar in a group with no name just “the guys” that played at different places in town and just enjoyed being together making music. From his time with Frontier he learned the many aspects of the weather and it became a hobby after he retired, watching the weather and figuring out all the patterns.

The family asked that in lieu of flowers, memorials may be made to the Help for Health Hospice Home in care of Davis Funeral Home, 2203 West Main Street, Riverton, WY 82501.